ADELPHI, Md. The Army's Institute for Soldier Nanotechnologies (ISN), located at MIT, developed a 3D printing platform that can enable both the modeling and design of complex magnetically actuated devices. 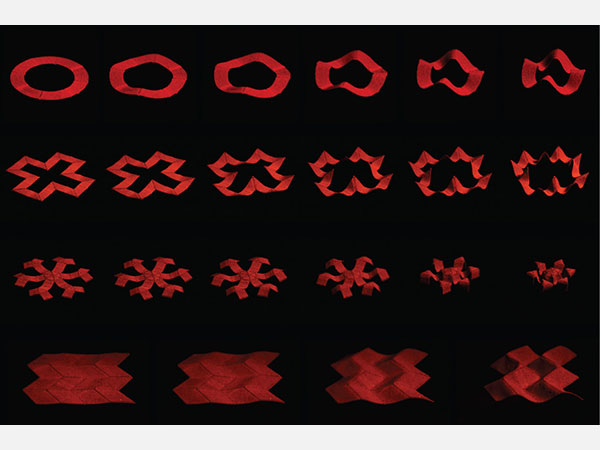 This technology, say the researchers, may enable the future Army to fabricate magnetic 3D printed structures that can crawl, roll, jump or grab in support of Army relevant needs. Although other groups have fabricated magnetically activated materials to accomplish simple movements, the Army/MIT team's new approach enables both the modeling and the design of magnetically controlled device sections to perform more complicated, Army-relevant soft robotic tasks.

The research effort enables controlling the magnetic orientation of newly 3D printed devices so that they are able to rapidly change into new intricate formations or move about as various sections respond to an external magnetic field; the team believes that such materials could be used as reconfigurable soft electronics; mechanical metamaterial that can jump; and a soft robot that can crawl, roll, catch fast-moving objects, or deliver pharmaceuticals.

This research is managed through the U.S. Army Research Laboratory's Army Research Office by Dr Aura Gimm. Authorities at the military branch say that soft robotic capabilities and manufacturing at the point of need are among the Army's top research priorities and that this direction aligns with Army modernization priorities that support future Army operations through support of ARL's extramural basic research campaign and the Army's Robotic and Autonomous Systems Strategy.

"This research provided new insight on ways to cause fast changes in 3D shapes of parts such as robot's limbs. The MIT group demonstrated this success using auxetic metamaterials - synthetic composite materials that have an unusual internal structure and the unusual property that when exposed to external magnetic actuation, they shrank in both longitudinal and transverse directions. This is different from typical auxetic materials that do require direct mechanical contact, and when compressed they undergo contraction in the directions perpendicular to the applied force (this is called the negative Poisson's ratio). On the contrary, common materials expand in the directions orthogonal to compressive load. In one example from this research, through remote magnetic control, they caused a metamaterial structure to jump forward 120 mm within 0.7 s, which is very fast for the current state of the art. This jump was due to a rapid release of elastic and magnetic potential energy stored in that structure. Such complex shape-morphing structures could have great potential for the Army, because they may help create soft robots - robots with pliable limbs similar to natural organisms. Compared to the current generation of rigid robots, soft robots could move much more dexterously on a complex battlefield terrain," says Army Research Laboratory Dr. Alex Hsieh.

The approach is based on direct ink writing of an elastomer composite containing ferromagnetic microparticles and the application of a magnetic field to the dispensing nozzle while printing. The technique reorients particles along the applied field to impart patterned magnetic polarity to printed filaments, which enables the researchers to program ferromagnetic domains in complex 3D-printed soft materials to enable a set of previously inaccessible modes of transformation. The actuation speed and power density of the printed soft materials with programmed ferromagnetic domains are orders of magnitude greater than existing 3D-printed active materials.

"We have developed a printing platform and a predictive model for others to use. People can design their own structure and domain patterns, validate them with the model, and print them to actuate various functions. By programming complex information of structure, domain, and magnetic field, one can even print intelligent machine such as robots," said MIT Professor Xuanhe Zhao, an investigator at the Army's ISN.